Dan Stewart of Purdon Planning, at our Annual General Meeting on 2 December 2021, outlined the Indicative Development Plan (IDP) which Cox Architecture and Purdon Planning have together prepared for the site in Curtin ACT proposed for MyHome.

This work was commissioned jointly by the Woden Valley Uniting Church (which owns the site lease), the MyHome association and CHC, the largest provider of affordable housing in the ACT. The IDP is being finalised after discussions with representatives of the Curtin Residents Association, the Woden Valley Community Council and the Uniting Church at the congregation and Synod levels.

The IDP shows how both MyHome and a development of affordable rental housing units can be situated on the site, fully suitably and consistently with the Curtin Group Centre Master Plan and ACT planning rules. This fulfils the purpose of the commission, while leaving more detailed design work to be done. This design work would build on how the IDP combines convenient access for residents of both developments with sufficient privacy, notably for the outdoor living area of MyHome residents. The illustration below is part of a concept design for the MyHome buildings included in the IDP. 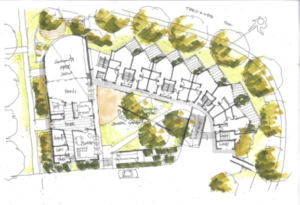 If both developments go ahead they would be adjacent on the site and their respective residents could have some association, as described below. However, the two developments are being proposed separately, and would be designed, financed, built and managed independently of each other. While we are keen to go ahead with the MyHome development, CHC and the Uniting Church have yet to assess the financial prospects of affordable rental housing as described in the IDP and decide whether to seek approval for that development. Even if CHC’s and the Uniting Church’s decision is positive the two developments may go ahead at different times, because the process of obtaining development approval for affordable housing may be more protracted than for MyHome. The Uniting Church has made it clear that the MyHome development should go ahead whether or not the affordable housing development does.

The prospect of association between residents of the two developments arises because the proposed shared areas of MyHome include a large room or rooms, with adjacent kitchen, amenities and storage, so that activities can take place there involving larger numbers than of MyHome residents. It’s a key element of the MyHome model that activities can be held in these shared areas in which MyHome residents would mix with others from the Curtin and Woden areas and beyond. Therefore, to the extent wanted by the MyHome residents, there could be activities including residents of the affordable housing and helping to develop neighbourly links. It is also possible that the affordable rental housing would offer a suitable housing option for residents of MyHome who after a period there felt ready to manage with less support while remaining close to friends and familiar surroundings; and that it might include some disability housing.

If you’d like to receive our news by email as it goes up on our website, please enter your name and email address here and press Subscribe.